Blog - Latest News
You are here: Home1 / a place called grace blog2 / The Challenges and Joys of a Woman Traveling Alone 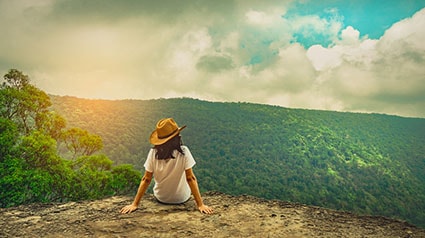 As the time got closer and I made my final payment, I was excited to hear who my other like- minded travelers would be. Then the news: “No one else has booked the trip for that particular week,” the company reported. I was offered a change of date but my tickets were already purchased with points and I had gotten a wonderful dog sitter to take care of my dog, Dea. No, I was not going to change my plan. Instead, I chose to view this as a new adventure and an opportunity to remain the independent woman I have always tried to be.

In all honesty, I was a bit concerned about being with one guide every day, all day and for dinners but I went with the flow and again viewed this also as an occasion to become friendly with someone from Sicily (the guide) and also to practice my Italian. Plus, I knew we could make our own schedule such as not getting up too early, which is my least favorite part of traveling with a group.

I have friends who are surprised and equally in awe when I say I am going to travel alone in Italy on my vacation. “I could never do that” or “Wow, that is brave, but won’t you miss the company?” they said. My reply was always the same: “Not really.” When you travel alone you are never truly alone. You meet people all the time in the strangest places. Plus, you can do whatever you feel like doing when you want. The adventure is all yours.

I arrived in Syracuse, Sicily the night before I was to meet my now “’private” guide, and when I checked into my room, there was a blue bag with my name on it. It was a gift from the guide filled with almonds, a water bottle and energy bars. So thoughtful of him. The following morning, a handsome dark-haired young man, named Lorenzo met me at the hotel and we were soon en-route to Noto, about an hour’s drive away.  Noto, is a magnificent city rebuilt in the Baroque style after the devastating earthquake of 1693 left destruction.

The weather was rainy and cold so we walked around Antica Noto and ate a too good and too caloric lunch. The most perfectly cooked al dente freshly made linguine with mushrooms and lentil soup. It was perfection in culinary delight even as I worried about gaining weight without doing enough exercise.

When we checked into the first hotel, it looked like a palace for a queen. In fact, it had been a palace for a prince. I was given a humongous room with high ceilings and an ornate chandelier that must have held 50 tiny light bulbs. The furniture rivaled any royal palace with a distinct feeling of Sicilian Aristocracy. High ceilings, brownish mosaic tiled floors and a king -sized bed. The bathroom was even larger than the immense room and also had the same lavish chandelier. I felt like royalty too. The property was called Seven Rooms and I believe they gave me close to 7 keys in order to get into the property. Some were for the different gates, the entrance to the staircase, the room plus a fob. If anyone has read my memoir, A Place Called Grace, then you know I am terrible with directions. Now you will also know I am terrible with locks and keys. Lucky me, as a woman traveling alone, wonderful Lorenzo got me safely inside each night using fobs, then key after key to open all the gates, staircases and finally my room. There really are many perks in being a woman traveling alone.

Lorenzo and I walked every day for miles as I discovered some of Sicily’s distinct terrain: we walked along miles of green vineyards and by the beach as well as up to Mount Etna, which had decided to erupt more abundantly as soon as we arrived. The volcano at the peak is composed of four craters. It was magnificent in its majestic beauty and astonishing in the explosions from the distance of white and black colored ash which we both felt in our eyes as well as on our faces. It was very cold and windy at the top, so we hiked further down the volcano into the forest area. Then, unexpectedly, the forest was gone and there were open paths of lava, producing a distinct separation caused by the last earthquake.

I spent my last two days in Taormina, by the beach alone, after my trip with Lorenzo had ended. As I was waiting for my room to be ready, I met a couple of guys form the states who were super friendly and offered to take me to lunch the following day in town. We took the funicular to the center and in pouring rain walked through the crowded streets filled with tourists and one gift shop after the other. The sidewalks looked like they were made from cream and brownish colored marble and were slippery so I tread carefully, not wanting to end my trip in the hospital.

My new friends had found a restaurant that they liked so we went there all eating mouthwatering pizza’s with just the right amount of cheese (one was big enough for two people) and laughed as we told stories about our lives. We have remained in contact even after our lunch together and they were the first people to welcome me back to NY after my trip ended. I never felt less lonely. Traveling as a woman alone, at least for this trip, taught me again that I could be just fine with just myself, and that leaving things to chance empowers me to become a less rigid person.

A Life Without Caffeine, Even Temporarily, Slows Everything Way Down

What I learned from writing my first book
Scroll to top