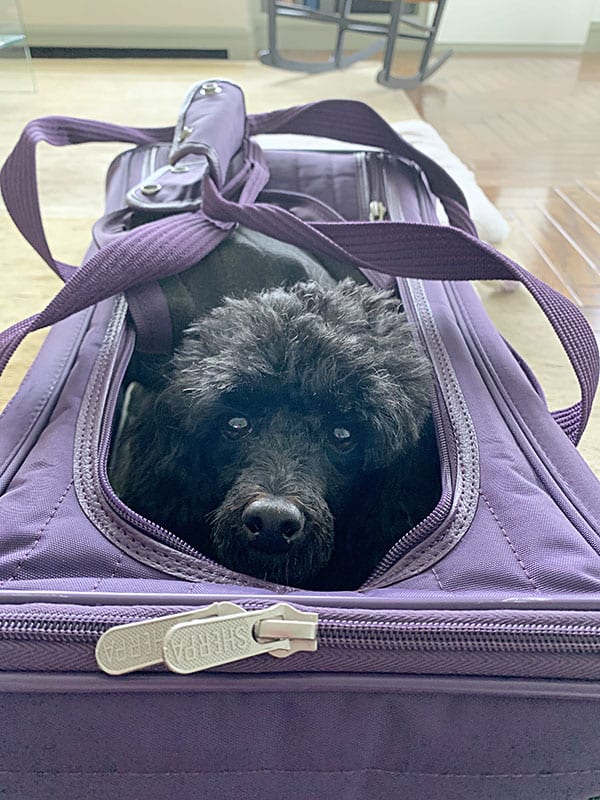 I am a planner and I planned this four night three and a half day break from the city (Manhattan) with my dog Dea. We were going not far but far enough that it felt like a real break in the action- to a dog friendly hotel in CT.

As usual, I packed way too much but, in all fairness, I had to bring some of Dea’s favorite squeaky toys, especially her turquoise elephant and giraffe rope toy, an abundance of wee- wee pads, and her kibble all measured out into separate bags along with a can of soft food to mix in.  Plus, cookies, of course, for both of us.

We were excited to exit the city (Manhattan) after being in quarantine since March.  We got there easily in a car and the hotel looked pristine and elegant and all the hotel workers wore masks along with the guests, now mandatory for both. The hotel even had an Illy coffee machine in the lobby. If any of you have read my book, A Place Called Grace, then you will remember how I needed my one and a half cups of super strong coffee each morning. Seeing this machine made me feel immediately contented and relieved.

After we checked into a comfortable room with a small private balcony overlooking a sparkling Greenwich Harbor, we took a short walk to where the shops and restaurants were so we would know the lay of the land. That night I ate dinner at the elegant outdoor restaurant located on the hotel premises with Dea on my lap. She was the perfect guest patiently curled up on my lap, eyeing and smelling my food from those confines. The manager brought her a gigantic bowl of ice water which she guzzled during my dinner.

It was a flawless first day and night. Dea was being her charming and loving self to all the hotel management staff as she gave each one a knee hug, immediately fostering a smile from all.

The next day I went to the small hotel gym, something I was craving for six months since they had closed in NYC. I was the only one there so Dea came with me ensconced in her purple Sherpa Bag.  Later in the afternoon, I treated myself to a massage and when it was over, I stood up to put on my robe, and I couldn’t walk on my right foot without extreme, acute pain. OWWW. What is this? I thought and asked the massage therapist to explain. She said she didn’t do anything and she really hadn’t. I hobbled back to my room telling myself, whatever this was, it will pass.

I decided to take out my dinner from one of the restaurants in town because the weather was calling for severe thunderstorms. A hotel worker drove us there and when we returned back to the room, my toe and toe joint were getting much worse. What is this? I thought, irritated and wondering why we couldn’t just have a relaxing few days away without any problems. I gulped down a glass of red wine and between the time I ate at 7:30 and 11 PM the pain became overwhelming. It was a non -stop pain that killed  even when nothing touched it. I called a friend in N.Y. who egged me on to call my podiatrist, in NYC.  I finally acquiesced around 11:30 and luckily the podiatrist took the call. She asked if I had Advil or Tylenol with me (It wouldn’t have done anything at this point anyway) but I told her no. From far away all she could think of was to alternate between ice and warm water. I tried that but it made the pain worse. It was unbearable. A burning and throbbing non- stop sensation.  I begged the hotel manager to get me Advil but hotel policy did not permit. I took a tranquilizer hoping that would help me calm down enough to try and sleep but it was futile. I was in level ten pain. I could not even lie down on the bed. I called the car company and ordered a pickup for the next morning, that was if I could make it through the night. I contemplated going home at 1 AM but knew that would be impossible with this agonizing pain. I began to shiver uncontrollably even with my robe on. I couldn’t stop shaking so I called the hotel manager again. “I am calling an ambulance,” he said.  I told him I would not leave Dea, my support dog in the room and he said to just bring her papers, (I had a doctor’s note stating she was a support dog) and put her in her Sherpa bag.

Frantic and out of breath from this unrelenting and excruciating pain, I put Dea into her Sherpa bag and I slipped on a pair of sweat pants and a tee shirt. Two big and muscly EMT men were already outside my door. I told then I could not walk, as I hobbled out the door, teary and scared. They placed me on the gurney, and Dea was placed under me safely in her Sherpa bag and off we went in the ambulance to the hospital. It was 1:15 AM when we arrived. First, they took my temperature and asked the basic covid questions. After about a half-hour of questions including about insurance, a PA came in telling me the doctor needed to see x rays before she would come and look at my toe. Another hour passed and Dea and I were wheeled into the x- ray room to take the x-rays of my toe, Dea far away on another bed, and then back to the private ER room I had been in. About 2:30 AM the doctor came in, looked at my toe and joint, tried to touch it as I writhed in pain, and said it looked like pseudo gout. “What?” I said. I know I don’t have gout. She repeated, pseudo gout stating it was similar but different. The doctor offered Advil in the hospital and at 3 AM gave me a Norco pain pill to only take when I returned to the hotel. Plus, I got a walker and a shoe boot because I could not put anything on my toe much less a shoe and walk.

The two EMT men had left hours ago. They only get you to the hospital and it was 3:30 AM in CT. I was told no taxi companies were open in Greenwich. Finally, a nurse called a neighboring town and got a taxi to come pick us up and bring us back to the hotel. He was a pleasant Indian man who helped me get out of the car until the hotel manager could get me a wheelchair.

Once back in the room, poor Dea was exhausted so she jumped up into the bed and safely watched as I used the walker to get around the room, fervently taking my Norco pill, praying that it would help- immediately. It took about an hour and half to finally allow me a few hours of sleep. The next morning the hotel manager was thoughtful and helpful because she brought me my Illy coffee and offered to pack for me but I was able to gingerly pack up in the next three hours before the car service arrived.

En-route home, I spoke with my primary care doctor who called in a super strong anti-inflammatory medication and the pharmacy said they would deliver it by the time I got home.

The following morning, I saw my podiatrist who had to take a sample of any fluid in the toe joint. But to do that she had to inject numerous needles into my foot to anesthetize the many nerves surrounding the joint. Tears rolled down my cheeks; it felt like burning acid but I got through it. Surprisingly only blood came out as now the doctor was thinking it was probably from trauma and not gout.

During that week I rested and by the weekend I was able to walk Dea slowly in athletic shoes.  The following week I got the lab report and heard it was not gout or pseudo gout because the lab didn’t find any crystals, the telltale sign of gout, but rather, just blood. This agonizing and debilitating pain was apparently caused by an unknown trauma of which I have no idea how it happened. If it was from using the elliptical for the first time in 6 months, I have covid-19 to blame for that. The one soul that got me through this ordeal was my dog, Dea; always the most extraordinary and accommodating spirit I will ever know.