Blog - Latest News
You are here: Home1 / a place called grace blog2 / Is dating during the pandemic an oxymoron? 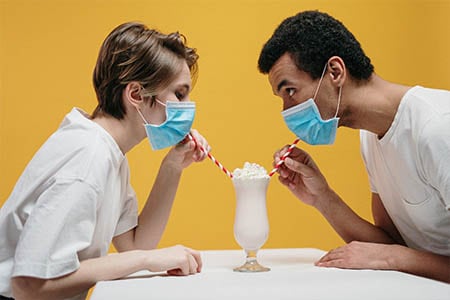 I sometimes wonder what the point is of dating during the pandemic. Sure, there are many reasons to try because in lockdown or even now, in NYC so many of us feel isolated at times and eager to connect with others. However, if I am being honest with myself, this “new normal” during the pandemic isn’t much worse than the “old normal” dating days of on- line dating pre- covid-19 where hoping for a good relationship and wanting to trust that the person is authentic, is always paramount. So that has not changed even though our world has.

Since my last serious relationship ended a few years ago, it has been difficult and feeling almost impossible to meet anyone whom I consider a normal, viable, possible mate.  Is it me? Is it being in NYC? Others think it should be easy to “meet someone” because there are so many people here. I remember when I lived in Rome, Italy, many years ago, I met a new possible boyfriend just walking down the street or in the gym that I frequented. It was so easy. Now not so much.

I miss the days of meeting someone I’d like to go out with just going about my life and then eagerly going through my closet to find the perfect clingy sweater and form fitted slacks for the date. But now, even if you do meet someone, probably on-line, there is no indoor restaurant seating due to covid and it is January, too cold to sit outside. Where can one safely go?

In addition to the dating debacle, I miss dressing up wearing some of my dresses that I had purchased on a vacation in Italy years ago or even just wearing a great looking blouse and nice slacks. Since we are in the midst of the worst pandemic in over 100 years my wardrobe has consisted of athletic wear and athletic shoes for when I walk my poodle “dogster” Dea and then go to exercise, after which I slip on a pair of jeans and a sweater. But, some mornings, as I sip my coffee and play with Dea, tossing one of her squeaky toys, I steal myself into my bedroom and longingly look inside my closet. I then start a fashion show for myself and my dog, putting on all my favorite clothes and fantasizing wearing them again at a nice dinner, sometime.

It’s considered the norm to meet other men online even though I still feel weary about it because anyone can become someone whom they are not. It’s all too easy to fabricate one’s life and who one is from concocting stories about their profession to how they actually look in real life. Many display photographs from over ten years ago and often when you do meet in person, they are unrecognizable.

When the pandemic first hit NYC last March, a neighbor suggested I try one online site where to meet a man, I would swipe in a particular direction-right. I quickly connected with a psychiatrist who had also swiped right. It was a match. I was eager to find out more about him. He was attractive, athletic and smart. I still hold a masters in social work so I also thought that we would connect about our interest in helping others.

We began a phone connection and spoke every week for two months. Our conversations lasted about an hour and I looked forward to them each time so I arranged my daily four-mile walks in the park with Dea, to be available to talk with this intriguing stranger. We had much in common; our love of Italian food, our love of traveling, skiing, and mostly our desire to meet someone that could last. The only thing I worried about was what I would do if I liked him? After all we were in a pandemic. Would he be conscientious and feel the same way about wearing a mask as I did for safety?

After two months there was exciting news. The NYC restaurants that had been shuttered due to covid would open for outdoor dining and the psychiatrist and I made our first outdoor dinner date. For the first time in a long time, I was actually looking forward to this date. I took my time going through my closet like in the old days of dating and chose a summery, feminine cotton dress. This time, I didn’t have to take a nap in the afternoon to try to sike myself and prepare for what had usually been an uncomfortable night with a stranger.

I put-on makeup for the first time in months. For so long there had not been any reason to wear makeup, under a mask, after all. Some of the lipstick got smeared onto the inside of my mask, but he wouldn’t see that. I planned to take off my mask when he came and removed his. We met at the table at a lovely Italian restaurant in my neighborhood. The tables didn’t feel as if they were six feet apart from the other tables and I calculated I would be about 2 feet away from where he would be sitting but I tried to let that anxiety go. I was ecstatic being outside eating dinner for the first time in four months.

He came about a half hour late blaming it on trying to find a parking meter. I understood. When he sat down at the table, he wasn’t wearing a mask but rather had one dangling from his wrist. So, I took mine off. He didn’t look like his photos. He too had submitted photos taken long ago and now he was much heavier and looked much older. Ok, I said to myself as I tried to just concentrate on our conversation that I knew would be riveting based on our two months of prior telephone calls. It wasn’t.

While he was a gentleman and paid for dinner without hesitation, there were no sparks. As we said goodnight, I put my mask on and saw he never put his on. I stumbled home with blisters from my high heals that I had not worn in months, feeling disappointed. He did text me a few times afterward to see if I was well due to covid fears, but that was it.

Since then, I have swiped mostly left (meaning not interested) but on occasion I have tried to be open about connecting with other right swiping guys. For example, there were a few attractive and seemingly interesting men who had been texting me but then suddenly, later that day, the site sent me a text saying they removed these men due to a suspicion that they were not who they said they were. The company went on to say that when they investigated further and the matches were authenticated, the men would be reinstated. They weren’t. Bummer. I never understood why so many have appeared to be fraudulent.

There was an attractive looking man who found me on another site and we set up a time to speak on the phone. Immediately, the conversation turned to dogs and the dog he had whom he said was the best. I tried to tell him how special Dea is and he changed the subject back to his dog. When I mentioned that I was looking forward to one of the presidential debates, we quickly discovered we were on opposite sides politically. That phone call ended quickly thereafter.

Recently there have been a number of men who wanted to call me after exchanging a few texts so we tried connecting in a phone call,  always believing that was a better way to check someone out and to screen out suspicious characters than texting one-line sentences like “where do you live?” and getting a non answer.  It was bizarre. When the stranger called me a few hours later his voice was deep and husky plus he had a cockney English accent that took me by surprise because he said he was from Scandinavia. When I asked him about it, he said he was educated in England. From the moment we spoke he sounded shady and in fifteen minutes I told him I needed to take Dea out.

Strangely enough, a few weeks later there was another man from a different site who said he wanted to talk on the phone. Again, we made a phone appointment and when he called the connection was terrible, like he was in Afghanistan, but I could still hear him well enough to shudder. He had the identical voice of the deep, husky cockney accented previous man. I quickly got off the phone.

If it is me, I don’t know what I am doing to be this magnet to strange and shifty men. So, for now, I am elated to be on my own with Dea. While the isolation is difficult, I feel empowered that if I can get through this pandemic alone with Dea, I can get through anything. One day, when life becomes more normalized, after we are vaccinated and able to walk outside without a mask all the time, while walking my dog, I will have lipstick on and smile at a man and we will have a conversation, the old-fashioned way.

My new oasis during the dark days of the pandemic

My Valentine Gift
Scroll to top