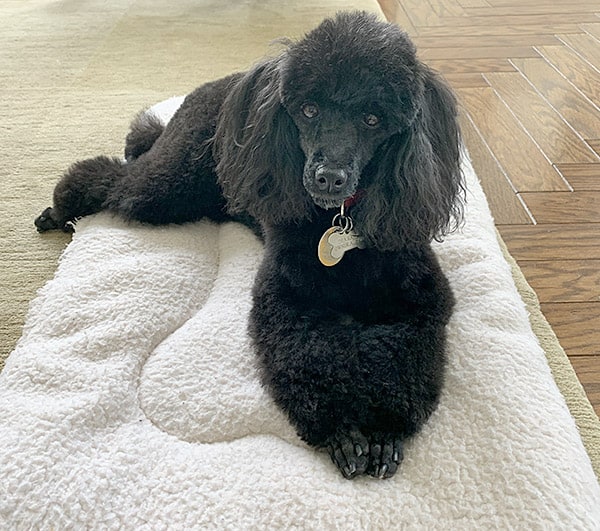 My amazing dog, Dea had an appointment yesterday morning. SHE got an appointment at her “doggie hairdresser” or groomers. Wow is she lucky even though she pretends it is a day of doom and gloom. But this time, during the covid-19 pandemic, it was like she was a secret agent being passed into a safe house. When we arrived at the store for her appointment, as Dea and I were waiting outside, I called the store to tell them we were there and then a hand wearing a glove suddenly appeared as it stretched itself outside the door to take Dea’s leash from me. The door closed and Dea was safely ensconced inside. It happened so quickly that Dea didn’t have time to react as she usually does with her sudden worrying behavior, that she knows pulls at all my mommy heart strings every time, to get her out of there- that is until the second I leave. From that moment on, her body posture and tail raise up and she begins to play with the handler. What a little actress she is. (They tell me that every time I come to pick her up when she is finished).

I used to stress the entire time Dea was at the groomers until I found this place. While there, Dea gets “the works” meaning her beauty day begins with a thorough brushing and then an oatmeal bath, fluffing and drying and then a perfect puppy cut. Then her ear hair is softly pulled out and her nails and dew claws trimmed, leaving her paws looking a million times better than my own hands at this point.

It’s been 10 weeks since I set foot in my hairdresser and even longer since I had a manicure and could I use a day like that! But it is not in the cards for a while until NYC is able to open up safely more businesses due to the corona virus.  My day was rather different; I too had an appointment but it was at my urgent care facility down the block for the covid-19 antibody test. I was so relieved that I could finally get the test to see if I have any immunity to the corona virus. I was ill in Mach with mild symptoms of something and would be so relieved to know that I have the antibodies. Like with Dea, it was contactless because I had previously registered on line with all my information. When I arrived, I didn’t have to even sign in and I was put into an exam room. When the doctor came in he asked me some basic questions as to why I wanted this test and finally drew the blood sample for the antibody test. I wouldn’t know the results for about a week, he said.

When Dea was finished about three hours after I dropped her off, I had to call the facility from outside to let them know I was there waiting for her and a hand wearing a glove thrust itself outside the door with my dog on her leash. Dea is gorgeous after the groomers (she is equally so every day) but she smells as clean as spring flowers without any perfume. Her thick coat of black hair is soft like plush velvet. She knows how beautiful she looks too as she prances down the sidewalk eager to go home.

Both our days were important and needed. But as much as I can’t wait for my antibody blood test results, I daydream about going back to the hairdresser too.

Grateful for [a] Saturday Night Fever